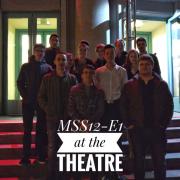 Friday night was eagerly anticipated by Hr. Gutmann's English LK. Shakespeare In Love, performed at the Saarland State Theatre (Saarländisches Staatstheater). It is everything the title says it to be... and more. The play depicts the creation of Shakespeare's Romeo and Juliet in a very comedic way. Two of the actors had been sick, which, however, did not affect the brilliance of the performance as the stand-ins did their job incredibly well, albeit with text in hand. Much like the piece incorporated historical facts in the same manner. As stated, the play is very comedic, featuring William Shakespeare experiencing Writer's Block as well as the pressure of having to write a play in a very small time frame. There's a lot of banter between Will and the other characters, such as Marlowe.

We are also introduced to Will's love-interest-to-be Viola, a young lady who is very passionate about theatre - especially Shakespeare's plays. She is supposed to be married off to Lord Wessex, whom she does not love. Her passion for Shakespeare, however, leads her to pretend to be Thomas Thomas Thomas Thomas Kent.

Will is totally blown away by "his" casting and wishes to hire "him" immediately, and inquires about "his" place of residence, before "Thomas" leaves hastily. He, however, is so infatuated with having "Thomas" as his Romeo in his play that he delivers a letter to "Thomas'" residence. Accompanied by Marlowe, he manages to get into residence and meets Viola. He gives her the letter to "Thomas" and soon finds himself feeling strongly about her. Shortly after, we get to see the Balcony Scene we all know and love, where Marlowe acts as Will's wingman. All of this is accompanied by many kisses and other sensual moments acted out by all binary gender pairings, giving the audience a very
pleasant time.

However, if one expects the play to be all funny and fine, they don't know Shakespeare well enough. The play takes the viewer on a serious roller-coaster of emotions, which - despite the impression one may have got throughout those sadder moments - eventually leads to a quite satisfying conclusion.

Absolutely fascinating too was the stage itself. It was set up to resemble the backstage area at the front, separating the front and the back of the stage through a number of well-used curtains. The function to lower the stage, smoke machines and lighting didn't remain unused either which led to some really cool effects, such as displaying a boat
on the river.

Last, but definitely not least, the musical accompaniment struck an unexpected tone, which fit really well into the play, though, especially their version of "Greensleeves" which actually made it sound good for once (unlike some ice cream vans, I know, which have caused me to forever hate the piece).

I totally recommend the play to anyone who knows Shakespeare and wants to have a pleasant evening, and I thank Mr Gutmann for presenting us with the option to such an enjoyable evening.