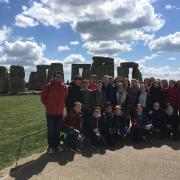 In the following text I want to tell you about our class trip to Grittleton. The people there are really friendly and the place was beautiful, for example there are lots of old trees. On our way to Grittleton we had a break in Canterbury. Some liked this place best because of the little shops and the very old buildings. And we had our first English food there. The old city wall is beautiful, too.

On the second day we were in the city of Bath and in the Roman Baths. This was really great – we had a guided tour and learned a lot about Bath, its history and buildings. And we tasted the hot water in the Roman Baths. It´s healthy, but not really delicious. There was a lot of time for shopping, too. So we could shop souvenirs and typical English sweets.

We went to Stonehenge on the third day and at Lacock, a typical English village with lots of nice houses. At Stonehenge some tried to pull a stone – we realized how hard it was to bring the stones to Stonehenge from far away.

the next day we visited the city of Bristol, the place where our schoolbook children came from. There we were on the SS Great Britain and experienced how it smelled, sounded and looked like during a trip from England to the U.S.A. and we were allowed to touch everything. Some even tried to sleep in the very tiny beds. After that we spent some time in the aquarium.

On the last day we were in London on the London Eye, in the city, we saw the Houses of Parliament, Buckingham Palace, Trafalgar Square, Piccadilly Circus and Big Ben. But the most special thing was that we crossed Tower Bridge with our coach. That was fantastic!